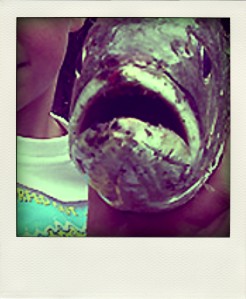 The farm was at the end of a dirt road that had deep drains gouged on either side. We crossed three cattle grids to get to the house, on the steep bank of the river.

A single piece of fine wire roped off the roads, keeping the cattle in their place. When I decided to take my bike off the dirt road and into the paddock I found myself on the ground, strong-armed off my bike by the almost invisible force of the single wire. The bike lay across it. I grabbed the handle bar and felt a deep throbbing into my body. Electricity. I left the bike and ran back to the house.

My parents were friends with their parents and we went there on weekends sometimes and stayed overnight. We loved the sloppy joes made by their American mother – mince cooked in tomato sauce and served on white bread – and we loved the river. It was wide and made no discernible movement toward the sea, 50 kilometres away by river, less if you drove. We thought it must be deep. We wouldn’t swim in it, we didn’t know what might be in there. I saw my legs kicking and swirling with kilometres of water underneath, nipped by catfish and eels.

My brother and I fancied we’d catch something in there. The river was so big and so full of possibility. I got the feeling my father never really liked fishing, or perhaps it was just that he didn’t like fishing with his five kids in tow. When we got the chance to fish at the farm it was special. We had once caught a crab and a bream off a small wharf at Ballina. My brother caught a catfish at a local creek. We talked about these catches for months. This river would surely deliver us something that would outdo these.

We went to a part of the bank that was flatter than most. Us kids had hand lines and they didn’t really work through the grass and rocks at the side of the river. We moaned about needing a boat but I knew if we had one I would be nervous about it tipping over. My father had a long beach rod. It was maroon with little loops of yellow along its length. There were two big round handles on the simple reel, neat and perfect wooden mushrooms.

The meal we were going to eat when we caught our fish! Mum was going to be surprised when we bought the fish back. Dad would be happy and we’d go fishing again after he saw what we could catch. We threw our lines out and dragged them back in almost immediately. Got snags. Had some of the food packed in the picnic basket. Got no bites.

Until something bit Dad’s line. We could see the rod bending right over, the line running off the reel really fast. It must be HUGE. Dad struggled with the reel and wound it and wound it and bent the rod from this side to that side and then flung the rod back violently behind his head. The catch arched up and sailed through the air and back onto the bank, some way up the hill behind us. We ran to where it landed to see what it was. An eel was flinging itself around in the long grass. It was almost green and had some spots near its tail and sort of wings that ran along its body. It was the ugliest thing I had ever seen.

Originally posted to Pool as part of the Rivers project.

This piece was recorded and broadcast by ABC Radio National.

I write about a lot of things, at the moment it's Australian Football as played by women. View all posts by Georgina